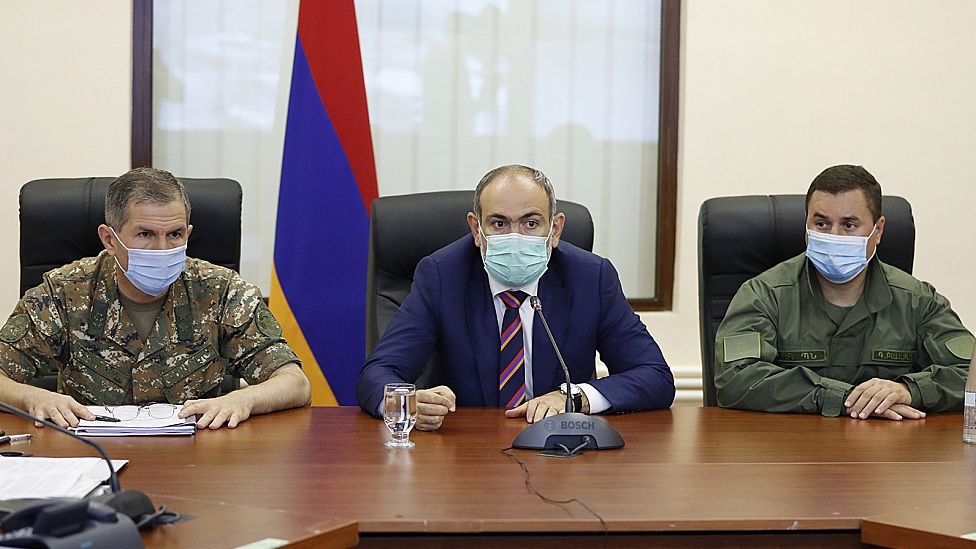 In its dispute with Azerbaijan over Nagorno-Karabakh, Armenia is prepared to make compromises if Azerbaijan is able to do so as well, Prime Minister Nikol Pashinyan of Armenia stated on Tuesday.

In its dispute with Azerbaijan over Nagorno-Karabakh, Pashinyan was confident that Russia would respond to its support if required.

I am sure that Russia will maintain its treaty commitments as per the scenario, “he added.”

“On the grounds of negotiated concessions, disputes need to be settled,” the prime minister added. “Nagorno-Karabakh is willing, and Armenia is willing to mirror the compromises that Azerbaijan is serious about making.”

While Russian President Vladimir Putin expressed his concerns over the Nagorno-Karabakh conflict, he also emphasized and expressed that the solution to the problem should be carried out considering the territorial integrity of Azerbaijan.

Armenia is a member of the Organization of the Collective Security Treaty (CSTO) headed by Moscow and has been sponsored by Russia, which has a military base in the country.

In the meantime, Pashinyan said the support of Turkey had encouraged its ally Azerbaijan to participate in a new battle in the region, and if Turkey were part of it, he would not consider peace negotiations.

“The move to start a war was inspired by complete backing from Turkey,” he said.

As a prerequisite for any truce, Turkey supported Azerbaijan’s request for Armenia’s removal from Nagorno-Karabakh and voiced a willingness to be involved in any talks between both the warring nations.

On his trip to Azerbaijan, Turkish Foreign Minister Mevlut Cavusoglu called on Tuesday for the global community to support Azerbaijan in the dispute.

His remarks come after Russia, the United States, and France called for an ‘unconditional’ end to the war on Monday.

The Western powers had expressed the view that in order to preserve peace, Turkey would use its leverage with Baku, but Cavusoglu later said that world leaders must cast their weight towards Azerbaijan.

After a briefing with Cavusoglu, Azerbaijani Foreign Minister Jeyhun Bayramov told reporters that there was no possibility of a truce unless Armenian troops withdrew from the area.

“The Armenian armed forces must abandon the occupied territory of Azerbaijan,” he stated.

The Ministry of Defense of Azerbaijan and the officials of Nagorno-Karabakh both said battling continued on many fronts on Tuesday morning.

Both sides continued to say heavy casualties of personnel and infrastructure have been incurred and to blame each other for attacking residential neighborhoods.

After the conflict began, both sides have claimed approximately 400 casualties, including 48 civilians, although the actual number is estimated to be much higher.

Most of the recorded casualties come from the Armenian side, which has registered 240 separatist fighter fatalities. Authorities from Nagorno-Karabakh said some 220 troops and at least 21 civilians were killed in the battle.

The Azerbaijani authorities have not confirmed military fatalities, but have confirmed the deaths of 27 people.

With the worsening of the violence, Russian Foreign Intelligence Service Director Sergei Naryshkin notified Tuesday that terrorist fighters, including Al-Qaeda-affiliated Jabhat al-Nusra, were engaging in the area. Hundreds or even thousands of extremists are trying to make money off the region’s latest battle.

Naryshkin said during a speech, “We are concerned about hundreds and even thousands of extremists aiming to earn money in the latest Karabakh war.” He worries that the area of the South Caucasus might become “a new launchpad for foreign terrorist groups” from which terrorists, like Russia, could infiltrate states.

Nagorno-Karabakh falls within Azerbaijan, but since 1994, at the close of a separatist war after the dissolution of the Soviet Union three years earlier, it has been under the rule of Armenian forces supported by the Armenian government.