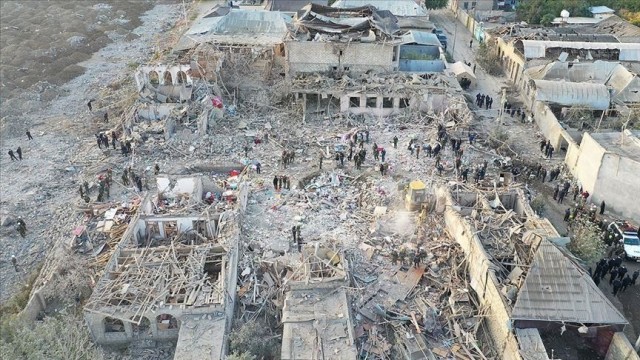 At least 69 Azerbaijani civilians have been killed, 322 wounded by Armenian attacks since the escalation of fighting on 27 September, officials say.

The Armenian military continues to attack Azerbaijani civilian towns and army posts on the border in violation of the new cease-fire, Azerbaijan informed Wednesday.

According to the Azerbaijani Ministry of Defense, Armenian forces deployed in Berd, Chambarak, Vardenis, and Gorus fired on the Azerbaijani regions of Tovuz, Gadabay, Dashkesan, and Gubadli employing multiple kinds of weapons at varying times during the night and morning.

Besides that, in the late morning, the Armenian military also shelled the Tartar area, the ministry added.

Combat operations proceeded predominantly in the direction of the front in Aghdere, Khojavend, Fuzuli, Zangilan, and Gubadli, it said. The ministry further noted that the Armenian forces’ efforts to attack were “determinedly halted,”.

“There are killed and injured among the enemy troops in different directions of the front as a consequence of the retaliatory action taken against the Armenian armed forces. many of their fighting vehicles have been destroyed.”

The statement noted that attributed to a major loss of vehicles, the Armenian side experienced logistics difficulties in the delivery of food, arms, and ammunition.

In its continuing attempts to raise 2,000 reservists to combat Azerbaijan, Yerevan had also failed, it added, emphasizing that it could only recruit 300 so far.

The Ministry has separately published videos of military trucks, weapons, and ammunition abandoned by the Armenian units who fled in the direction of Gubadli during the battles.

On Sunday, a provisional humanitarian ceasefire negotiated by the US was declared and took effect at 8.00 a.m. Monday local time (0400GMT). It was short-lived, though, as the Armenian forces immediately breached the cease-fire only a few minutes later.

At least four civilians have been killed, including a two-year-old child, and 13 were injured, including women and girls, when the Armenian Army attacked civilian settlements in the Barda region of Azerbaijan.