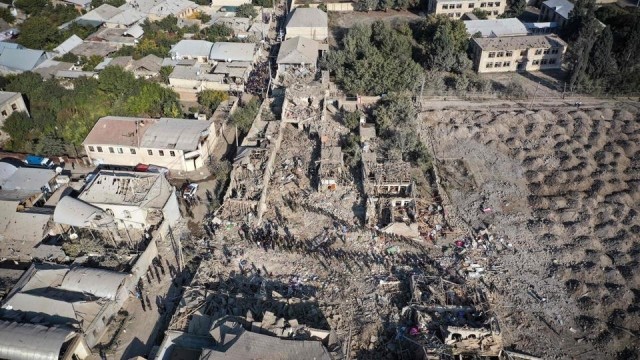 Since the persistent breaches of Armenia, the ceasefire in the occupied Nagorno-Karabakh region has been heavily strained.

President Ilham Aliyev called on the international community to enforce sanctions on Armenia.

Aliyev on Tuesday said in his TV lecture that the Armenian military is engaging in “civil massacres,” adding that Armenia must comply with international legislation.

Aliyev has voiced a commitment to free Azerbaijan’s territories from the Armenian occupation, adding that Zangilan town has been liberated.

Aliyev’s statement came as a ceasefire in the mountain territory of Nagorno-Karabakh was under severe strain on Tuesday after fierce new clashes between Azerbaijani and Armenian forces.

Saturday’s cease-fire did not have any impact on the fighting that started on September 27th, although it is believed to provoke a larger confrontation between Russia and Turkey.

Since September 27, hundreds of civilians have been killed by attack drones, helicopters, heavy artillery, tanks, and rockets, raising questions regarding humanitarian problems and stability concerns for the Azerbaijani oil and gas pipelines.

The latest ceasefire seems to have had little more impact on war than the collapse of a prior agreement negotiated by Russia.

Azerbaijan hopes to end the Nagorno-Karabakh, called Artsakh by ethnic Armenians, Armenian occupation. The Azerbaijani Tartar and Aghdam regions were being shelled by the Armenian armies.

Azerbaijan said on Friday its foreign minister will hold discussions in Washington with US Secretary of State Mike Pompeo and the Minsk Group.

The envoy, Vasily Nebenzya, quoted TASS as saying that “This is not a simple operation.” He proposed that the OSCE should be active in every observer mission.

Turkey’s parliament speaker has criticized the OSCE Minsk Group over the ongoing Azerbaijan-Armenia crisis, saying that the group is “brain-dead”.

“The OSCE Minsk Group has been brain-dead,” stated Mustafa Sentop in Azerbaijani parliament, which has not been able to find a solution to Nagorno-Karabakh for three decades.

The OSCE Minsk Group was formed in 1992 to find a peaceful solution to the conflict but to no avail.