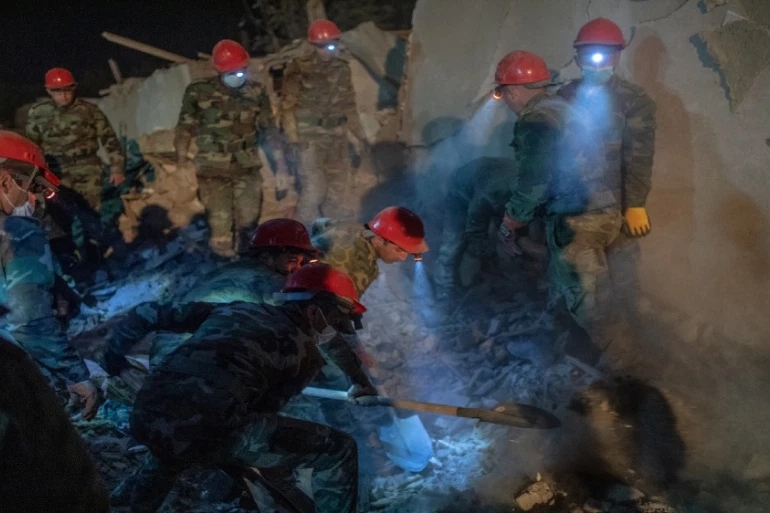 More than 40 people have suffered an attack, said the General Prosecutors of Azerbaijan.

The Hikmet Hajiyev, the assistant of the Azerbaijani President, said on Twitter, “Civilians are still being rescued from the waste of devastation by emergency services.”

‘Treacherous and barbaric missile assault on civilians by Armenia in Ganj is a reflection of the vulnerability and misery of the political and military hierarchy of Armenia in the face of its battleground defeat.”

“About 10 people have been killed and about 40 injured. We continue emergency rescue operations. Armenian State Terror program must be halted.”

“It is in a disgusting way that Armenia’s Foreign Ministry wants to disclaim his state duties for these sinister war crimes,” the spokesman emphasized.

In the first instance missiles fired at the Ganja were classified as a SCUD and Elbrus ballistic operative missile according to Azerbaijan National Agency for Mine Action (ANAMA).

“Armenian war crimes are likely to be the focus of unscrupulous demands for a humanitarian truce,” he said.

According to early estimates, more than 20 houses were demolished.

“Armenia has been given with new missile systems. They began targeting people in a treacherous and barbaric fashion in Azerbaijani towns, “Hajiyev said in his own tweet. It is a “protest against the state policy against terror in Armenia,” he said.

Mingachevir was also targeted by the Armenian troops.

In an announcement that the hydroelectric power plant of Mingachevir was targeted at around 1 am by the Armenian military, Azerbaijani air defense prevented the launching of Armenian missiles in that area, the general Prosecutors of Azerbaijan said.

In the assault on Azerbaijan’s second-largest city of Ganja, at least 13 civilians-two of whom are girls-were killed and more than 40 injured.

The attack by rockets demolished a row of homes in a sudden escalation in the Nagorno-Karabakh conflict on Saturday, killing and injuring people seriously in sleep.

Azerbaijan President Ilham Aliyev vowed “revenge” when the assault on Ganja signaled a dramatic rise in the dispute.

“There were more than twenty buildings,” according to Hikmat Hajiyev, Azerbaijan’s Assistant President.

A Ganja strike, with a population of over 300,000 residents, occurred just six days after a rocket hit another urban residential area, killing 10 people, causing injury to many.

Sevil Aliyeva, a resident of Ganja told Al Jazeera “Fortunately my family and I weren’t at home!” “It’s ruined my home.” 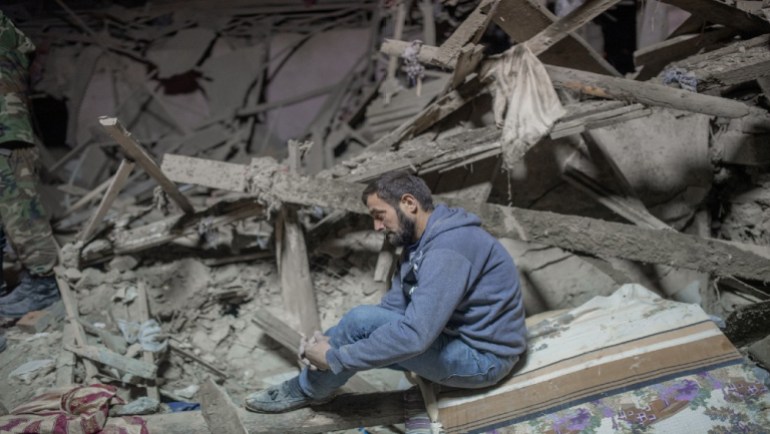 Hours after the shelling, the President of Azerbaijan announced that the country’s army will take vengeance on the battlefield.

According to Artsakh News, Azerbaijan, and the Armenian war in Nagorno Karabakh, called Artsakh by ethnic Armenians, an Azerbaijani territory mainly inhabited by the ethnic Army, is the worst in the territory since the 1990s. The conflicts started on September 27th when Armenia targeted civilian settlements in a nearby border region.