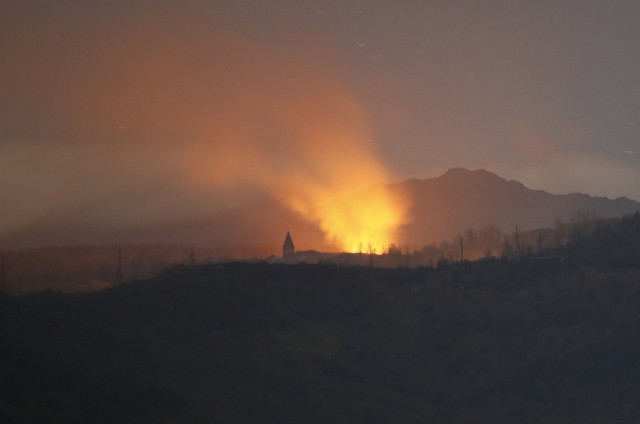 “After 28 years, the voice of Adhan will be heard in Shusha. Azerbaijan liberates Shusha following 3 decades of invasion” Aliyev said that in his speech.

“We have shown the world that Nagorno-Karabakh is the historical territory of Azerbaijan,” he said.

Our victory walk proceeds. If my conditions are not met by the Armenian government, we will go until the end, “Aliyev said during his address in the Alley of Martyrs in the capital of Baku.”

Seizing control of Shusha is a big success for the Azerbaijani forces, which, after fresh fighting raged over Nagorno-Karabakh a month ago, have made advances against Armenian separatist troops.

The city is situated on the vital heights above Khankendi (Stepanakert) and on the road connecting the city to the territories of Armenia.

Last week, in Nagorno-Karabakh, the chief of the Armenian separatists said that Azerbaijani forces were shutting down the city of Shusha and that its liberation would mark a defining moment after a month of battle.

Separatist leader Arayik Harutyunyan alerted in a video filmed outside the famous cathedral of the city that advancing “enemy” forces were 5 kilometers (3 miles) “at most” from the city.

“The principal objective of the enemy is to take Shushi … whoever controls Shushi controls Artsakh,” he said, using the Armenian city and Nagorno-Karabakh terms.

He called on the Armenians to protect the strategically valuable city, the second-largest after Stepanakert in Karabakh.

“We have to reverse this situation at the front in the next few days and punish the enemy right at Shushi’s gates. Let’s join and defend together,” he said.

Since Armenian separatists supported by Yerevan took control of the mountainous region in a 1990s war that left 30,000 people killed, Azerbaijan and Armenia have been trapped in a bitter fight over Karabakh.

The self-declared autonomy of Karabakh has not been recognized globally, even by Armenia, and, under international law, it continues a part of Azerbaijan.

Despite concerted diplomatic attempts to put it to an end, the heaviest battle since a 1994 cease-fire began on Sept. 27 and continued.

The opposing sides have agreed to cease-fires 3 times, the last on the weekend in a U.S.-brokered agreement, but the ceasefires have all broken apart easily.

With renewed bombing and mortar attacks on residential areas, the conflict has escalated in recent days.